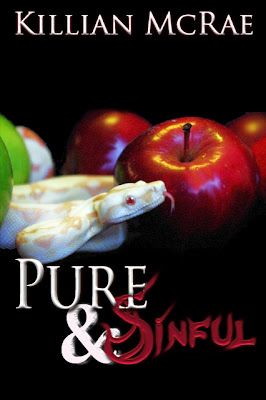 Statistician Riona Dade knows all about probabilities. Still, even she’d tell you the chances of discovering you’re a witch, being appointed to the demon-slaying trio known as the Pure Souls, and finding yourself sinfully attracted to a catholic priest who uses amen and other four-lettered words with equal enthusiasm are pretty slim. Also learning your ex was once Hell’s first-round draft pick, and realizing you’re a prize catch for Satan’s soul-damning quota leaves a girl feeling like she just won the lottery while being struck by lightning while riding a unicorn across Atlantis.

Trying to keep her mind off role playing the Thornbirds with Father Angeletti, Riona leads the Pure Souls against a maniacal menagerie of Mephistopheles’s minions plaguing greater Boston. Giving in to lust is a direct flight to damnation for both her and the priest, leading Riona to distract herself by striking up a romance with her new, foxy neighbor, Lucy. But she can’t shake her attraction to Marcello, and as the tension between them grows thicker than a lumberjack’s beard, temptation may become too difficult to resist.

How long can they deny the pull growing between them, knowing there will be Hell to pay?

As Dee sauntered away, Riona focused on the priest’s expression. Marc wasn’t in his collar and coat today, but always carried the air of the clergyman within to some degree, like he wore his collar on the inside.

She took in the rugged cut of his jaw, the stubble that showed he hadn’t shaved in a day or two. He wasn’t bad looking by any measure, and he probably could have been quite the heartbreaker if he wasn’t a man of God. His eyes weren’t brown, they were black, and glistened like onyx pendants. A firm jaw and supple lips were likely often employed more for battling the fires of Hell than fanning the flames of lust. Nevertheless,  the tools were there to be used, if he so desired. For a man of the cloth, he sure cut that cloth fine.  The priest rose to what she considered the perfect height, had a body not too muscular, but hardly milk toasty, and a swagger in his walk that would make a lady think he could move his body in all the ways the good Lord intended.

If only his collar and his personality weren’t pressed with double starch.

“Paolo’s is the best pizza in town. Trust me on that, I’m Italian.” Sarcasm wasn’t his most attractive trait, but it was one of the most prominent.

“Don’t deflect the question,” Riona commanded with a click of her tongue. “I mean being one of the Pure Souls. I know how you found me…”

“… secured in a straitjacket and pending shipment to a cushy psychiatric facility?”

She crossed her arms and grimaced, wondering suddenly if the hex she’d learned to give demons jock itch would work on humans. “Look, you walk through the steel wall of a meat locker and try to explain it to the police in a way that doesn’t get you 5150’ed, and then you can talk. But, I mean, a priest? Isn’t the Catholic Church, you know, kind of not kosher with the whole magical powers and battling goblins thing?”

“Technically, the Catholic Church isn’t kosher with anything,” he returned.

“Kosher’s a Jewish thing, not that I think the people of the book are anymore approving of mortal combat with the spawn of Hell. I was born into it. Magic is a birthright, you know. It shows up in my family every couple of generations. Just like being a priest — like my father before me, and his father before him.”

The official release date is September 19