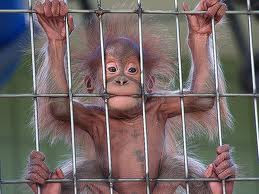 Lincoln Park zoo is a wildlife Mecca situated among sprawling urban landscape on the North side of Chicago. It is one of the oldest zoos in the country and is home to a wide variety of animals. Chicago’s Lincoln Park zoo was opened in 1868 after New York City gifted us with a pair of swans from Central Park and remains one of only a handful of free zoos still in operation.  So getting in is easy, escaping, well that’s a whole other story.

In 1874 a bear was the first animal purchased for the zoo for ten dollars, by 1879 he was adept at escaping his enclosure and would be found wandering Lincoln Park by street lamp. In 1899 several seals escaped and were located waddling in a restaurant on Clark Street, they were all rescued except for one who avoided capture by slipping into Lake Michigan. In 1931 the first lowland gorilla arrived at the zoo from Africa, his name was Bushman and he drew huge crowds and attempted escape many times.  In 1983, Otto, a 450-pound gorilla scaled a 10-foot glass barrier and was strolling around the zoo when a zookeeper shot him with a tranquilizer gun. Then in 1986, three gorillas got through a door someone left open, and one of them bit the keeper’s hand!

Lincoln Park Zoo is an urban zoo set on 49 acres in the heart of Lincoln Park. Some of my favorite attractions are the Nature Boardwalk, Farm in the Zoo, which is a replica of a Midwestern operating farm and the Great Ape House. Admission is FREE and the zoo is open year round, hosting educational activities on a daily basis. The zoo’s exhibits include big cats, polar bears, penguins, gorillas, reptiles, monkeys, and other species totaling nearly 1,250 animals. It is especially beautiful during the Zoo Lights holiday festivities.

So if you visit Lincoln Park Zoo don’t be surprised if you hear the cry of a big cat bouncing off a neighboring skyscraper. Getting in will be easy, but there are lions, tigers and break-outs, oh my.